Tidal Music attracts millions of users around the world. Previously, Tidal lays emphasis on users who value the premium quality of music. Recently, Tidal Music has launched a Free Plan against Spotify and YouTube Music owing to the increasingly fierce competition between streaming services. Unlike Tidal, Spotify and YouTube Music, Apple Music is mainly supported by the users of Apple products. When it comes to music on Apple products, such as Mac, iPhone, and iPad, Apple Music dominates a big segment of the market. If you are an iOS user and want to use songs from other music sources like Tidal, what can you do?

But not all users are fans of Apple Music. If you are a subscriber to Tidal Music, I hope there is also no obstruction when you use Tidal songs on Mac, iPhone or iPad. This post is customized for people who are eager for adding Tidal songs to GarageBand on Apple products, such as Mac, iPhone, and iPad. Going through this article to avail yourself of using Tidal music anytime on any device.

Streaming music service like Tidal has imposed restraint on the downloaded songs. Tidal Free users can play songs with ads whilst Tidal HiFi and HiFi Plus users seize the option of offline downloading. Tidal paid users can not be exempt from a long-term continual subscription fee nonetheless. In addition, they are not permitted to download unencrypted songs from Tidal.

Tidabie Tidal Music Converter makes you become the exception. You can easily unlock the encrypted songs with this program. It extracts songs from Tidal Music to local files in various common formats. The conversion symbolizes the eternal playback of Tidal songs. Moreover, different output formats of Tidal songs can be compatible with more playable devices, media players, and programs. 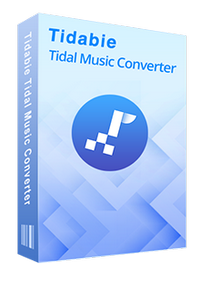 To follow our steps to convert Tidal Music tracks to local files, Tidabie Tidal Music Converter should be installed in advance. Both the Windows version and Mac version are available. But for GarageBand users, it's probably to run this program on Mac. Anyway, start this customized converter and click on the Open Tidal Web Player button on the primary page.

Head over to the top right of Tidabie, you will easily find the "Settings" button. This option allows users to change diverse output parameters. You should notice that GarageBand supports adding local songs in MP3/AAC/WAV/AIFF/ALAC formats. Thus, keep this notice in mind when changing the output format.

Tips: Want to get the secret of downloading all songs to one folder? Set "None" in the Output Organized setting. In addition, if you want to save all songs in the same order as the original playlist, select "Playlist Index" in the Output File Name setting.

In this built-in Tidal Music web player, you will see an additional button for converting songs anytime. You can play songs normally. Once you need to download a preferred playlist, click the "Add to list" button on the playlist's detailed page.

Immediately, the songs from the opened playlist will be loaded for further selection. Pick up any song you need then start the conversion.

On the right side, the "Convert Now" button is employed to generate an imminent conversion.

After a while, songs from Tidal Music are downloaded to local PC in common formats. Followed by this successful conversion, we are going to add these downloaded Tidal songs to GarageBand.

Step 1. Start GarageBand on Mac. Open a new project or an existing project.

Step 2. Open the music folder where the converted Tidal songs are stored. Drag any song to the editing screen project.

Step 1.iTunes is a feasible tool to upload media files from the local PC to an iOS device. Also, it's the most common tool for Apple users. You've probably installed iTunes on your computer before. Launch iTunes, we are going to use this tool to sync songs with iPhone or iPad.

Step 2. On the left side of iTunes, right-click the empty area to add a new playlist for storing the Tidal songs. Then connect your iPhone or iPad to your computer.

when the iOS device is connected well. Tap on the "Music" category, you will see more options.

Step 4. Select "Sync Music", then tick off "Selected playlists, artists, albums, and genres". From the playlist list, choose the newly created Tidal playlist. At last, tap on "Sync/Apply" to start uploading the Tidal songs to the connected iPhone or iPad. You can check the newly imported songs via the "Music" app on iPhone or iPad.

Step 5. Initiate GarageBand to add these Tidal songs from local space simply. On the start-up interface of GarageBand, open a new project or open an existing project. Then click this button

in the top left.

in the top right.

Step 8. Select songs you need from your iPhone or iPad. Drag any preferred song to the editing area so you can continue your work.

You may have been searching for a practical solution to import songs from Tidal Music to GarageBand, Tidabie Tidal Music Converter can easily help you out this time. Have a free trial, you won't be regretful.